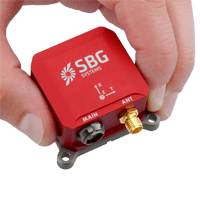 We needed a rugged high-end Inertial Navigation System which would make the task of sensor fusion easier, with a LiDAR for example

IMU and GPS, Core Parts of the Driverless Car

For the first time ever, Formula Student Germany introduced a driverless category, where race cars had to be adapted to drive without any human intervention. AMZ decided to take the challenge, and prepared “flüela”, their car used for competition from 2015, to be driverless. For the AMZ team, when designing a driverless vehicle, the IMU and the GPS are a core part of the sensor suite.

Lightweight and small, SBG Ellipse2-N is the most accurate of its category, and the easier to interface with, according to the AMZ team.The team was also amazed by the quality of the output position data. The Ellipse2-N fuses inertial data and position information for a continuous trajectory even in case of GNSS outage.

According to the AMZ team, it was a tough testing season with very hot days, extremely rainy days, a lot of vibrations, mounting, unmounting, plugging, unplugging. The sensor never failed. Every SBG inertial sensor is calibrated in dynamics and temperature (-40° to 80°C) for a constant behavior in every condition.

The team managed to be:

The overall event includes static disciplines in which the team also obtained good results: first in engineering design and cost, second in autonomous design and third in business plan presentation.

AMZ reached the podium in each of the eight disciplines, and won five of them.

We were amazed by the quality of the gyroscopes. No one in our team neither in our university could believe the little drift we were experiencing

Download full article
About the AMZ Project
About the Ellipse-N