OPSIA integrates the Ekinox INS in its MBES and MMS solution 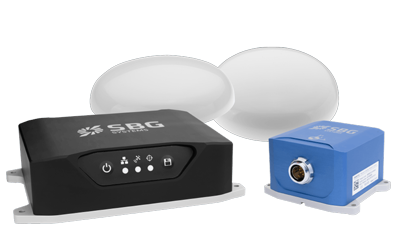 The increasing demand for high-resolution 3D bathymetric surveys at ever-increasing depths requires constant innovation from industry stakeholders. With this arises one major challenge: the recalculation between the terrestrial and bathymetric 3D models.
OPSIA, a French engineering office specialized in all kinds of surveys, decided to take on the challenge and to solve this problem with a unique solution: combining a multi-beam echo sounder and terrestrial laser scanner.

Combining a MBES with a Terrestrial Laser Scanner

The project consists in combining two different systems which are the MBES (Multi-Beam Echo Sounder) and a terrestrial laser scanner, both used with an Inertial Navigation System (INS). The project was created with the idea of using different devices that the company already had (MBES, laser scanner, INS) and combine them to obtain a combined solution of MBES system and MMS (Mobile Mapping System). 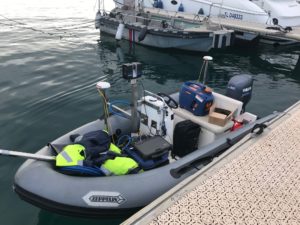 The Inertial Navigation System is used and integrated as recommended by Teledyne Reson, that is to say by inter-connecting the Portable Sonar Processor, the MBES, and the INS. All devices are synchronized by using a constant PPS signal.

The MMS is combined with the INS thanks to the use of a unique PPS signal, sent through one of the serial ports available on the Splitbox, to start recording laser scanner data and another one to stop recording data. Thanks to the record of the “Event Marker” corresponding to the first PPS signal, the synchronization in time is possible between INS data and laser scanner data. 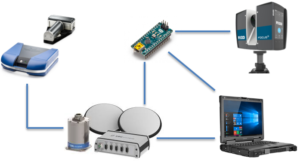 The Ekinox INS is in the center of the whole system. The MBES is connected to the SplitBox, which allows communication with the IMU and GNSS. The laser scanner is connected to the Splitbox to retrieve the timestamp of each rotation of the laser scanner mirror. Thanks to this and the use of another little electrical component (Arduino NANO), both devices are synchronized in time.

A big part of the project is done! The next step is to try to combine the MMS with the MBES, which seems to be a formality. 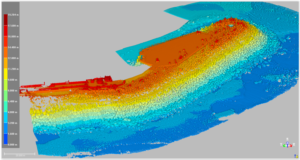 Opsia is a French engineering office of expert surveyors. For more than twenty years, the company has been conducting surveys of land, architecture, infrastructures, engineering, or hydraulic structures, cartography at all scales. Opsia possesses unique know-how, at the crossroads of many disciplines, in the field of terrestrial and aerial topography. Its technologies and the skills of its engineers are put at the service of a very wide range of projects to satisfy the most diverse customers: local authorities, industrialists, individuals, in France and around the world.

Ekinox-U pair with SplitBox was an inertial navigation solution dedicated to the surveying market. It made integration easier thanks to the integrated GNSS receiver and connections between several pieces of equipment and SBG inertial sensors. Today, this solution has been replaced by the Navsight Marine solution bringing more robustness with an aluminum IP68 enclosure, more status through LED indicators on the system (RTK, Power, recorder,etc.) and a tinier IMU to install closer to the MBES, as all the computation is done in the Navsight box which also embeds the GNSS receiver.