Some materials can influence the magnetic field of the Earth. Theses influences can be separated into two categories:

The following picture summarize the effect of both hard iron and soft iron effect:

>>The SBG Iron Calibration Tool is intended to compensate both Soft AND Hard iron effects using a powerful calibration algorithm.

However, it has limitations: it can only compensate disturbances that are constant in time and in space. The following image shows an example of the typical perturbation that can and cannot be compensated through calibration: 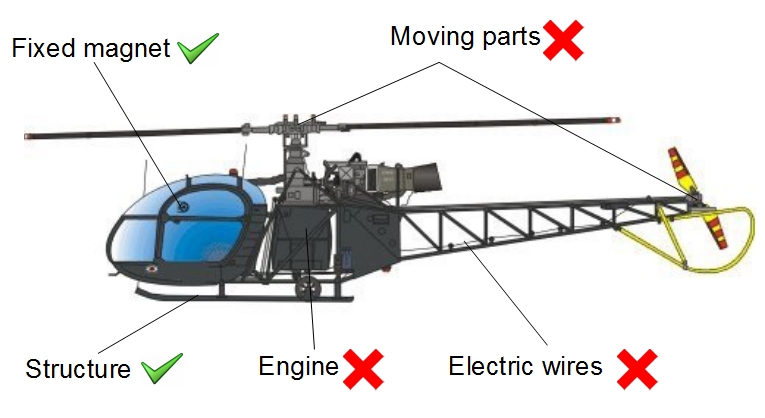 • Fixed Magnet and Structure are magnetic disturbances that stay constant and don’t vary in time. They can be compensated by calibration.
• Metallic Moving Parts, Engine and Electric Wires don’t have the same constant effect on the magnetic field: they are modifying it in different level of intensity / direction over time. They cannot be compensated for soft and hard iron effects.

When using magnetometers to detect the Earth magnetic field, every other field around is a disturbance. In order to avoid it: