Units were reliable, with no failures in the harsh Arctic conditions. They have been running continuously for over a year without requiring power cycling etc.

Over recent decades the Arctic has warmed more than any other region leading to significant reduction in sea ice volume. The combination of increased ice-free area and more mobile ice cover has led to the emergence of a seasonal marginal ice zone (MIZ) in the Beaufort Sea. The Office of Naval Research MIZ initiative engages an integrated program of observations and simulations to investigate the ice-ocean-atmosphere dynamics with several autonomous systems including wave buoys.

The program included 25 Wave Buoys to quantify high seas and in-ice wave characteristics and evolution. Twenty buoys were deployed in the summer period, 5 in the winter. “We needed a very rapid and cost-effective solution to measuring directional wave spectra in the ocean. Time to deployment was short, so an integrated solution, giving us good heave numbers straight out of the box, was essential. Delivery time of the units was also critical”, indicates Dr. Martin Doble, oceanographer at the French UPMC School and member of the research program.

The summer buoys, firstly drilled into the ice, were powered with solar panels, and equipped with IG-500A inertial motion sensors to detect both distant and near wave effects on the local ice floe. Once the ice melted, the summer buoys continued to measure open ocean characteristics. The 5 winter buoys were installed on the ice. These buoys were made of aluminium for better resistance and contained enough batteries to power them through the dark winter months. Every buoy also contained processing and control electronics, an SD card, a GPS, and an Iridium satellite modem and antennas to transmit the recorded data on demand to the Cambridge base station. Summer buoys (open ocean waves) and winter buoys (in-ice waves) data were also used together to quantify the wave attenuation rate. 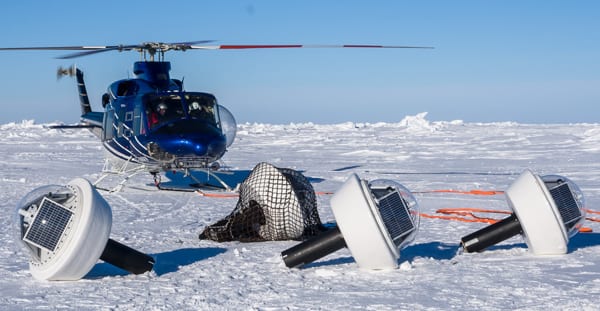 The IG-500A inertial sensors were used here for wave height and direction. IG- 500A measures in real-time roll, pitch, heading accurate to 0.35°, and heave, accurate to 10 cm. Every sensor is calibrated for bias, linearity, gain, misalignment, cross-axis and gyro-g from -40° to +85°C. It allows them to provide reliable data in harsh environment, and what can be harsher than the Arctic ice? “Units were reliable, with no failures in the harsh Arctic conditions. The IG-500A have been running continuously for over a year without requiring power cycling etc., and the numbers look good, giving clear results,” to quote Dr. Doble.

We needed a very rapid and cost-effective solution to measuring directional wave spectra in the ocean.

During the project, the Ellipse Series was released, a new line replacing the IG-500 series. More accurate in attitude and more reliable (IP68) for the same budget, the new miniature inertial sensors now provide a heave that automatically adjusts to the wave period for higher performance. The Ellipse-A sensors are currently used in a new ONR project in the Beaufort/ Chukchi Seas.